What Is Money Laundering?

In today's global economy, organized criminals generate huge sums of money through drug trafficking, arms smuggling and financial crime. But "dirty" money is of little use to the sophisticated criminal because it raises the suspicions of law enforcement and leaves a trail of incriminating evidence.

Financial havens offer an extensive array of facilities to foreign investors unwilling to disclose the origin of their assets. This includes the registration of international business corporations (IBCs) or shell companies and the services of a number of offshore banks which are not subject to control by regulatory authorities. In many cases, financial havens enforce very strict financial secrecy, effectively shielding foreign investors from investigations and prosecutions in their home country. It is estimated that there are more than 1 million "anonymous" corporations worldwide.
While bank secrecy and financial havens have both a legitimate purpose and a commercial justification, they can also offer unlimited protection to criminals who abuse their intent for the purpose of "doing business at any cost".
When "dirty" money has sufficiently moved through a "laundry cycle", it is considered cleaned, and made available to the original criminals, with its occupational and geographic origins obscured.

With their illicit proceeds, criminals can invest in sectors of the economy where the assets can later be used as laundering machines. This may take the form of investment in businesses involving high volumes of cash, such as restaurants, casinos, cinemas and even banks.

The deeper "dirty" money gets into the international banking system, the more difficult it is to identify its origin. Due to the clandestine nature of money laundering, it is difficult to estimate the total amount of money which goes through the laundry cycle. Estimates of laundered money have ranged as high as $500 billion a year. Efforts are now under way by international organizations to more accurately gauge this amount.

Wealthy criminal organizations can wreak devastating social consequences on society. Laundered money provides fuel for drug dealers, arms merchants and other criminals to operate and expand their enterprises. Left unchecked, money laundering can erode the integrity of a nation's financial institutions by changing the demand for cash, making interest and exchange rates more volatile, and by causing severe inflation in countries where criminal elements are doing business. The siphoning away of billions of dollars a year from normal economic growth poses a real danger at a time when the financial health of every country affects the stability of the global market.

The bank created a maze of front companies located around the world, which helped suspected criminals move their assets and evade regulators. When BCCI was finally dissected by financial regulators and investigators in the early 1990s, one of the most striking revelations was that it had operated for such a long period of time and with such freedom despite numerous warning signs.

What Is the Global Programme
against Money Laundering?

The General Assembly,
"Recognizing that the problem of laundering of money derived from . . . serious crimes has expanded internationally to become such a global threat to the integrity, reliability and stability of financial and trade systems and even government structures as to require countermeasures by the international community as a whole in order to deny safe havens to criminals and their illicit proceeds, . . .
3. Calls upon the United Nations Office for Drug Control and Crime Prevention to continue to work, within the framework of its global programme against money laundering, . . . to give effect to the above principles by providing training, advice and technical assistance to States upon request and where appropriate".

The Action Plan against Money Laundering, adopted at the
twentieth special session of the United Nations General Assembly
devoted to countering the world drug problem, June 1998

Raising the Effectiveness of Law Enforcement

GPML and Small States:
Working Together to Break the Money Laundering Cycle

Billions of dollars of laundered drug money flow through the international financial system each year. A significant amount of this illicit wealth transits financial centres in the Caribbean region. One State that is just beginning to have some experience with money laundering enforcement is Barbados, a small, closely knit society, where there is an opportunity to forge an effective alliance between police, prosecutors and those in the financial sector to break the money laundering cycle.

Other specialized topics included: search, seizure, mutual legal assistance, management of seized property, net worth analysis, the role of bank and financial regulators, and suspicious transaction reporting.
Barbados plays a leading role in police training activities in the Eastern Caribbean region and regularly trains cadets from neighbouring island States at its Regional Police Training Centre. A draft bill has been introduced in Parliament entitled the Money Laundering (Prevention and Control) Act, which will supplement existing crime legislation.
GPML's work in Barbados is part of a larger technical assistance work programme in the Caribbean. Similar law enforcement training is planned for Jamaica and other Caribbean nations.

What Are the International Instruments against Money Laundering?

The international agreements or treaties which form the framework for cooperation in money laundering matters include:

The key provisions of the Action Plan against Money Laundering recommend the following: 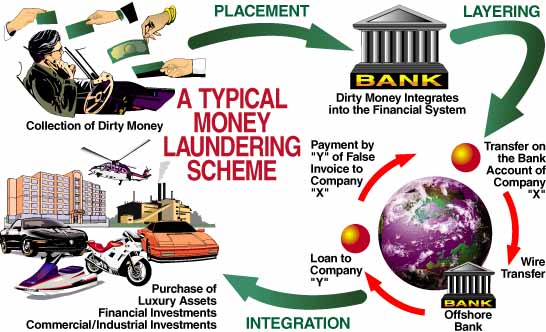 Q: What is money laundering and why do people do it?
A: Today, enterprise criminals of every sort, from drug traffickers to stock fraudsters to corporate embezzlers and commodity smugglers, must
launder money for two reasons. The first is that the money trail itself can become evidence; the second is that the money can be the target of investigation and seizure. The operational principles of money laundering are as follows: first, moving the funds from direct association with the crime; second, disguising the trail to foil pursuit; and, third, making the money available to the criminal once again with its origins hidden from view.

Q: How much money is laundered every year and how much is recovered by law enforcement?
A: Estimates have ranged as high as $300 billion to $500 billion a year. Law enforcement authorities recover about $500 million in a good year, roughly a quarter of 1 per cent.

Q: How effective are the international instruments governing money laundering?
A: The international community is not using all the tools at its disposal. The 1988 UN Convention against Illicit Traffic in Narcotic Drugs and Psychotropic Substances obliges States to make money laundering illegal and assist investigations. Of the 148 signatories to the Convention, fewer than 30 are fully implementing its measures.

Q: Is there an acceptable right to banking privacy?
A: Yes, but acceptable levels of confidentiality must be clearly defined. There are legitimate commercial, legal or even human rights reasons for confidentiality. However, the abuse of bank secrecy must be countered.

Q: What role does the Internet have in money laundering?
A: Internet banking is a growing source of worry. It has already been proven that fraudulent banking business can be conducted via the Internet. For example, in one case an Internet bank was domiciled in an offshore centre, the server was in another country and the operational management was located in a third. When the owners of the bank stole the depositors' funds, it was impossible to pursue them through the three jurisdictions. Their actions were not even considered illegal in the jurisdiction where the bank was physically located.

Q: What should the international community do?
A: The members of the international community have agreed to comply with the existing international instruments currently governing money laundering by the year 2003. Of particular importance is adherence to the provisions of the 1988 United Nations Convention against Illicit Traffic in Narcotic Drugs and Psychotropic Substances. But the international community needs to continue to question the way banks are defined. Should they be chartered by Governments in order to tighten controls? How should they be regulated? Should we allow companies to be formed in places where they have no apparent purpose connected with normal commercial activities, or whose owners may conceal their identity? An emphasis must be placed on systemic reforms, rather than specific tinkering with the odd regulation. The harmonization of regulatory regimes covering financial havens, trusts, shell companies and banks should be a main goal.

Q: What can the UN Global Programme against Money Laundering (GPML) do to help?
A: Developing countries, and those with economies in transition, are in particular need of technical assistance and training. Local law enforcement cannot crack down on complex financial crimes unless they know the tricks of the money launderer. The UN Global Programme against Money Laundering is ready to provide expert training, assistance, public awareness and research tools on the art of financial investigations,
prosecutions, best banking practices and financial regulations for government, business, law enforcement and judicial professionals.


To request assistance and additional information from the
UN Global Programme against Money Laundering, please contact
the United Nations directly at the following address: